I was pretty far into adulthood before I realized that failure wasn’t my cue to slink off in shame from something. Learning feels like failure if you’re not comfortable making mistakes.

My late, great journalism professor William Serrin liked to jokingly say, “No indignity is too great.” For me, it meant you should dare to try and fail, to put yourself out there. You should dare to ask. “No” is nothing, and “Yes” is always possible. Keep looking for the yes. 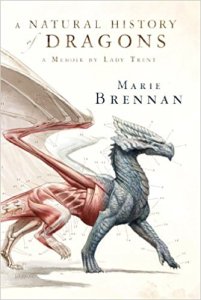 So when I asked the very accomplished fantasy author and essayist Marie Brennan—a Harvard grad whose writing awards are too numerous to list here—if she would agree to an interview, I was thrilled to find the yes.

Her philosophy below is reflected in her popular Memoirs of Lady Trent series, following the adventures of a dragon naturalist who’s accomplished in her own right and doesn’t let fear of failure slow her down. You’ll find these and Brennan’s many other books at Indiebound.

Following the theme of failure and disappointment, I asked her:

What’s the one thing you’ve learned about failure, either in your personal life or your career, that has been the most useful to you?

“For a lot of people, failure looks like a wall. The end of the road. A sign that you should turn around and go back.

I see it as a hurdle.

Like many professional writers, I have a stack of rejection letters for my short stories and novels. Back before self-publishing became a viable option, there were basically two possible responses to those rejections. Walk away… or pick yourself up and try again. Try harder. Revise the story, or write a new one, a *better* one. Level up.

People talk about editors as ‘gatekeepers’ and mean the word negatively, but it also has its positive side. Having somebody say ‘not good enough yet’ isn’t a condemnation; it’s a challenge. I never got away from having an initial reaction of crushing disappointment—I still haven’t—but after that fades, my motto is ‘Oh yeah? Watch *this*.’

I love the fact that self-publishing has opened doors for so many people, and especially for stories that don’t fit the traditional market—but it can also let you get away with coasting. There’s nobody but yourself standing between you and the upload button. It’s a bit like lifting weights: if you only ever lift things that are easy for you, then you won’t gain much strength. It’s possible to be your own gatekeeper, of course, but it takes a lot of self-discipline, because it’s always tempting to say ‘eh, good enough.’

Whether it’s in writing or some other field, though, we all need hurdles. New obstacles, not to make ourselves stop, but to make us leap higher. Because the satisfaction when you clear that bar is tremendous, and so is the reward.”

View all posts by Flora Stadler

One thought on “Marie Brennan: On Crushing Disappointment”