I’ve never been a fan of the “books are good for you” school of thought. Books are not broccoli, and poems won’t make you virtuous.

Plenty of social scientists disagree with me. Recent studies found that readers of literary fiction do better at recognizing, understanding, and inferring others’ feelings and emotions, while children who read a lot display higher levels of emotional intelligence, and increased empathy (http://science.sciencemag.org/content/342/6156/377; https://readingpartners.org/blog/reading-improves-kids-emotional-intelligence-increases-empathy/).

This is all good news, but literature shouldn’t be the vegetable of the arts. Must everything improve us? Can’t a novel, or a short story, or a poem simply be enjoyed, absorbed, and lingered over? Isn’t it enough to notice and admire the suspenseful plot, the gorgeous language, the finely depicted protagonist?

Then I read Rebecca Makkai’s The Great Believers, and it convinced me that there might be something to this books-make-you-a-better-person thing.

Half of the chapters take place in Chicago in 1985, and feature Yale, Nico, Richard, and the rest of their group of friends, all young gay men, as well as Fiona, Nico’s sister. Nearly all of these men are struggling with or affected by HIV/AIDS in some way. It was a sad shock to read The Great Believers and be reminded of how common, and commonly devastating, death was for this cohort just a few decades ago. 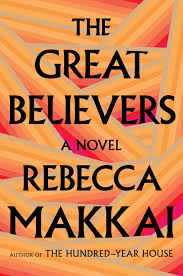 Fiona plays the central role in the alternating chapters. She is searching for her estranged daughter, Claire, in Paris in 2015. As we flash back and forth between young Fiona in the 80s—standing by her dying brother even as their family disowns him, nursing her friends throughout their illnesses—and contemporary Fiona, we gradually understand  the trauma of being the one left alive, and left behind. How do you live in a world populated by ghosts?

Makkai’s language isn’t particularly elevated or notable. It’s a fairly long book, and at first I didn’t want to read it: another overstuffed, earnest, well-meaning novel.

But as I read over the course of several days, I felt myself expanding, in my pity and despair and tenderness for these people. I  started to open to the terrible possibility of living during a plague, of dying pointlessly—or, of trying to make a life in the aftermath of devastation. I slid into the lives of these suffering, loving, laughing, crying people. In other words, I empathized with them.

So, while I distrust empathy as a reason to read, I value it as a side effect of reading. If a book can entertain us and bring us into the world of another, that’s only all to the good. At a time like this, marked by so much rage and distrust, anything that grows empathy is necessary, and welcome. We could all use a little more broccoli on our plates.

2 thoughts on “Empathy for the Reader”