I try to hike at least a portion of the Pocket Road trail here in Beacon at least once a week. On my last couple of walks up the trail, I’ve been leaving my headphones and podcasts at home, and instead paying extra careful attention to the rapidly evolving foliage, and the swollen creek rushing down the mountain—because I’ve been reading Landmarks, by Robert Macfarlane.

Published a couple of years ago, Landmarks traces Macfarlane’s explorations of the relationship between land, language, and history across the British Isles. I’m reading it slowly, savoring all of the linguistic nuggets he unearths, and it’s on my mind during my hikes in my own familiar terrain.

I’m only a couple of chapters in, but Macfarlane has already introduced and discussed several fascinating examples of nature-influenced language. For example, in the historical northern Scots dialect, “blinter” refers to the dazzle of winter stars on a clear night. Imagine—someone, at some distant point in Scottish history, looked up at the stars night after winter night, and knew he (or she) needed a word to describe this seasonal, regular part of his (or her) landscape and life. 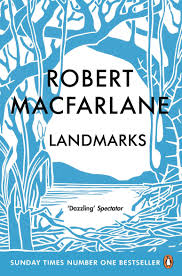 Macfarlane’s overall point, as he notes, is that “language deficit leads to attention deficit.” He couches this point primarily in our linguistic relationship to the natural world, which places him in a long line of British writers and poets (Wordsworth writing about the Lake District, for example).

Americans have their own history of locating themselves and their language in the land (Thoreau’s Walden comes to mind). Last fall, I read Edward Abbey’s Desert Solitaire: A Season in the Wilderness, before I visited Arches National Park in southern Utah, because Abbey worked in and around Arches and Moab as a park ranger in the late 1950s. Like Macfarlane, Abbey believes passionately that our relationship to the natural world is sacred, and in danger of being lost—and worth writing about and recording, because

“This is the most beautiful place on Earth. There are many such places. Every man, every woman, carries in heart and mind the image of the ideal place, the right place, the one true home, known or unknown, actual or visionary.”

While Macfarlane locates people’s history in the geography of the British Isles, Abbey finds his own natural home in the desert: 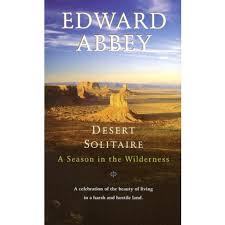 “The desert says nothing. Completely passive, acted upon but never acting, the desert lies there like the bare skeleton of Being, spare, sparse, austere, utterly worthless, inviting not love but contemplation.”

I’ve never written directly or deeply about the landscape of the Hudson Valley—my own native, most-loved region. Macfarlane and Abbey make me wonder if it might be time to learn more about how people have traditionally spoken of and interacted with this land, and write about this sweet valley that has nourished three generations of my family.

Time for me to hit the trail again, I think, and find some inspiration on the mountain.

2 thoughts on “Language and Landscape”