In a recent interview, the author Roxane Gay said something that jumped out at me:

“I read everything. The number one thing I tell my students is read diversely. And I’m not talking about demographics, though that’s part of it. Aesthetic diversity, genre diversity. It matters because it just makes us better informed, and it protects us from our worst instincts. . . Anybody who tells me, ‘I only read literary fiction,’ I’m just like, ‘Well, you’re an asshole. What are we going to talk about?’ Literary fiction—a lot of it’s not that good! . . . My favorite thing to read is spy thrillers, which I just love. I also read romance novels, because they are fun, and they are sweet, and they’ve got a happy ending, most of the time. The world is shit, so—I need that happy ending.”

Reading this, I realized that I hardly ever read anything other than literary fiction. I think that, in college, I was so eager to dive into the classics, and so suddenly aware of the canon, that I snobbishly turned away from anything that wasn’t approved by the academy. And, after graduation, working in publishing, I was surrounded by people who, like me, were reading the latest literary novel, and I wanted to keep up.

Maybe it’s getting older, maybe it’s leaving New York and the publishing scene behind—whatever the reason, I don’t feel that pressure anymore. So, taking Gay’s words to heart, I picked up two fantasy novels by Naomi Novik: Uprooted and Spinning Silver. I had recently stumbled across a glowing review of Spinning Silver, which praised its original and creative use of fairy tale. Although I never read fantasy, I do love the fairy tale-influenced work of Angela Carter (if you haven’t read The Bloody Chamber, get thee to a bookstore now!). So, Novik’s work seemed like a good opportunity to take baby steps into unfamiliar literary territory. 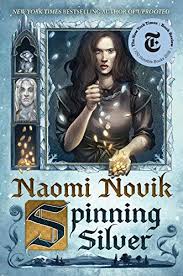 In Spinning Silver, Miryem, the daughter of a moneylender, lives in a town that seems to be situated in an Eastern European locale, a long time ago. Her family is Jewish, and faces anti-Semitism that rings all too true. The villagers live in the shadow of the Staryk—creatures of ice who will do anything for gold. This doesn’t bode well for Miryem, who discovers she has the magical ability to turn silver to gold.

I was impressed with how Novik adapts and twists the fairy tale of Rumpelstiltskin, and ingeniously subverts the anti-Semitic trope of the Jewish moneylender. She also explores the theme of female agency—without giving short shrift to the fantastical Staryk, and their unnerving ability to turn all the world to winter.

Similiary, Uprooted is situated in a Slavic-inflected, premodern world that is overlaid by magical elements. The protagonist, Agnieszka, is chosen in a longstanding ritual that takes place every ten years: a magician known as the Dragon takes a young woman to live with him for a decade, before he releases her and chooses a replacement. The village acquiesces to this sacrifice, receiving in exchange his magical protection from the Wood, a menacing, monstrous forest that seeks to encroach on the village year after year. 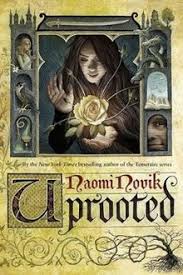 In Uprooted, Novik loosely adapts the fairy tale of Beauty and the Beast, but here, both of the main characters have magical abilities. I was pleasantly surprised to find that these books are well written, with fully developed plots and characters. She doesn’t fall back on the types of stereotypes that I’ve always ascribed to fantasy: there are no fire-breathing dragons or maidens in distress here. Novik may be a “genre” writer, but her books intelligently interrogate fairy tale and fantasy, while also engaging with perfectly “literary” themes like discrimination, gender roles, and social pressures.

Clearly, I’ve overlooked a lot  of great fiction by narrowly reading only one type of book; my future reading will definitely include a wider range of genres.

Have you read any romances, mysteries, thrillers, or fantasy novels that you loved? I’m open to recommendations!

One thought on “Reading Outside Your Comfort Zone”